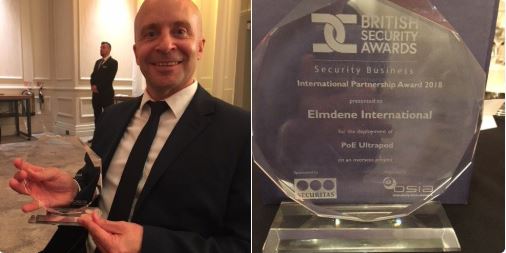 We are very honoured to have been recognised at this year's British Security Awards, hosted by the BSIA.

Elmdene were presented with the International Partnership Award for the PoE Ultrapod™, which has been used as part of a large Access Control System installation in an internationally renowned museum in Abu Dhabi, displaying some of the most historic and priceless artefacts in the country, security for the new building is of the utmost importance.

"Elmdene were able to bring together our design team and resource in order to creatively overcome an issue for what is already one of the world's iconic buildings.  The PoE Ultrapod™ is a unique, innovative product designed in the UK, solving an installation dilemma for a prestigious installation in an export market.  To be recognised for that by such a renowned organisation as the BSIA is a huge honour."

The PoE Ultrapod™ was launched last year, it is an ultra PoE splitter with 12V standby battery functionality to provide power for critical IP systems such as Access Control, over a single Ethernet cable.

Back to All News